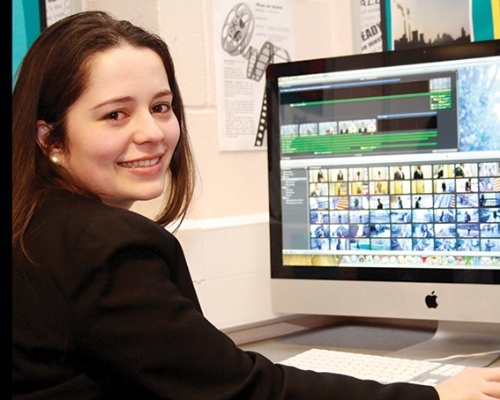 Congratulations to Sixth Form student Marielle Wilkinson, whose film 'Mania' won a Best Film award at the Zoom Young Filmmaker Awards 2014 against stiff competition from talented filmmakers from across Wales.

Marielle wrote and filmed Mania over the Autumn Term as part of her Media Studies A-Level, drawing on pupils and staff of St Joseph’s as cast and crew. It was clear to Mrs Bartlett (Head of Media), from a very early stage of production, that the finished film would have real potential.

Marielle, with her cast and crew, trod the red carpet at The Sony Theatre, Bridgend alongside the best young filmmakers from across Wales and Europe. The glitzy awards ceremony was the culmination of the BAFTA-affiliated Zoom Cymru International Youth Film Festival (17th-21st March), Wales’ largest film event for young people. Mania was entered in the 14-18 year old category and won against stiff competition from a number of talented young filmmakers from across Wales.

To view the film, go to our new You Tube channel.